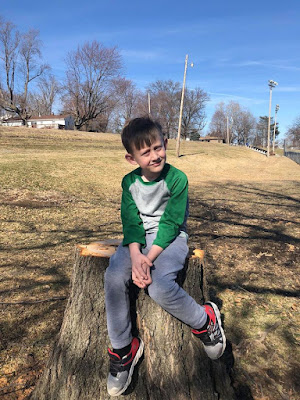 Baseball is officially back in season.  We have joined a new team, and it's like going from 1 to 10 in intensity.  He has a tournament THIS weekend.  THIS WEEKEND!!  The first week of March.  What have I gotten myself into?

This is the kind of team that throws in an extra practice, because the weather is nice.  So...yeah.  I'm a little nervous.  I don't exactly have all kinds of time to be Dillon's Uber, let alone sit and watch an untold number of games.  But...

I think this team is going to be really good for him.  I like the players.  They are respectful.  And they are good.  Intimidatingly good.  I had to help out a bit with his confidence in the transition, because guess what.  He is good, too.  Sometimes, we don't realize our own talents because of our big gaping insecurity.  And being thrown in from rec league to AAA isn't exactly a gradual transition.

I think he is transitioning well now.  But you can be sure that I will keep a close, mama-bear eye on it.

So...it's waiting season for the little guy.  Fortunately, he often enjoys going to practices, and since this one was near a park, we had it made.  And things turned for the better when a co-teammate's mom and little sis joined us.  Having a sibling who will be around a lot is a definite bonus for me!  Especially a friendly one, who likes to play.  Pokemon, even!! 😱 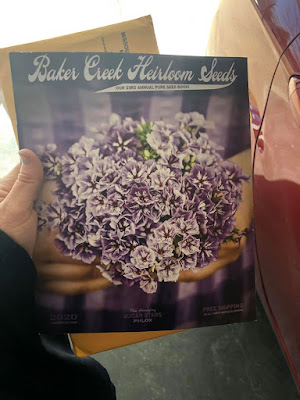 We are pretty excited.  And speaking of baseball and excitement...that brings me to...guess what else is right around the corner?  Spring, that's what.  My hands-down, all-time, very super dee duper favorite season of all.  I got my Heirloom Seed catalog in the mail and already have in an order of the most fun and unique finds.  I can not wait to get those little puppies in the ground, so I can watch them begin to grow!

My winter green housing didn't do too great.  My lettuce is alive, but it didn't get very big.  I know baby greens are good, but I want production!  So...I'm looking to my trusted Spring.

And speaking of production.  I was kind of famous this week.  😉😂  I got to take a group of students on a job shadow to a local news station.  I met one of the main news anchors in passing, and the meteorologist who led the tour was awesome with the kids.  They were more engaged than I've ever seen them.  They learned so much about the whole aspect of the job...not just the "glamour" they see in a local celebrity.  It made the whole thing a little more real, and I think it was quite inspiring.  I appreciated that they got to also hear about the multitude of jobs that goes into broadcasting the news...especially the behind the scenes, which we so often neglect to remember and comprehend.  Overall it was a wonderful experience, which I truly believe will benefit each student that was able to attend. 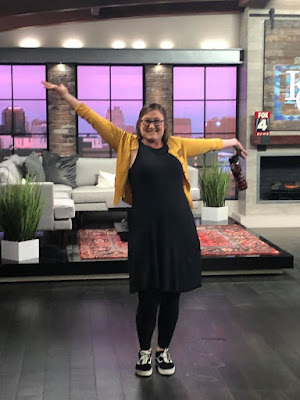 Now...all that aside.  The BEST part of the experience for yours truly was the Fed Ex guy.  I mean...it's a little awkward standing there staring at the receptionist and trying to keep up a conversation with a total stranger.  (Though...if anyone is good at it, I think we could all agree, it would be me.)  I held my innate awe when the local celeb news anchor walked past, and I responded to his royal implication that "we" were doing great!  But I turned to her as soon as he was gone, and we had this bonding moment.  "This is so weird!!" I said.

"I know," she exhaled relief in the genuine, mutual understanding.  "I'm still getting used to it."

But we barely had time to go on before the real famous walked in the door.  I'm talking 20 something male, full on purple uniform, bleached curly hair and the blingiest sun-glasses I've ever seen.  He was cool, calm and collected.

I kept trying to make eye contact and smile...to bring him into our little "peon" group.  But, while flashy, Mr. Fed Ex appeared to be steadily focused on his job.  His only dealings were with the receptionist, and the receptionist alone.  (I continued smiling through the process, despite.  I can be friendly, anyhow.)  But as he turned to go, Mr. Fed-Ex turned his attention to me in a drawn-out pause, as he inched his eyes up AND down along EVERY inch of my body, except my eyes...never once any eye contact...and he walked out the door. 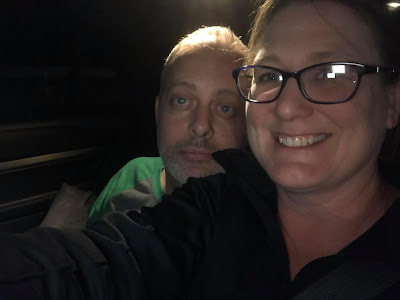 "Yeah...he DEFINITELY checked you out."

I laughed (busting with vision of Matt's murderous eyes when I would tell him ALL about it).

Then, my new friend and I talked about our mutual age and our mutual number of kids...and...I'm really going to miss talking to her.  I wish I'd left my card. 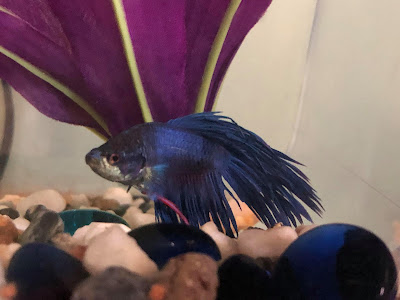 But speaking of Matt.  That he still gets so fired up...as if.  😂  I know where my loyalties lie, and this guy has proven time and again he ALWAYS has my back.  💕  Mama's not going anywhere, love.  😉

Oh, there is so much more I would love to say.  But it is getting late, and I am getting tired.  I will leave you with the these last two updates.  1)  Willis is dead.  I'm sorry.  I know.  I'm here if you need to talk.  As It turns out I was not a serial killer.  (Though Matt remains solely responsible for poor Monarch's death...as I continually remind him.)

Fortunately, I have a dear friend who happens to have a beta that happens to keep living.  So...I asked her advice, and she recommended I try a different pet store.  Yep.  That was a bad batch.  (And my girls, who paid a visit to the original store over the weekend, confirmed a whole poor little section of fish in quarantine.  😢  Sorry, little guys.  I tried.) 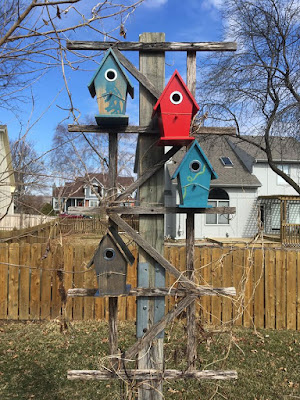 So...I sent Matt and Evan to the new store to pick me out a winner.  (Actually, I sent Evan.  Matt was just the funding and the transport.)  I told him everything I wanted, and he came home with this guy.  👆  I am not nearly as invested, though he is growing on me.  We continue to have odd feeding habits.  (This one eats for a bit and spits it out.  🤷‍♀️)  I'm just happy he has lived four days.  And he recognizes me now.  He looks for food when I come to the tank.  😁💕

I don't know if you can see it, but he has a grumpy looking face.  Nothing like ANY of the others I've had.  (And probably wouldn't have been my first pick, but we've seen how my pics can turn out.  You just can't always rely on the prettier, flashier ones.  They tend to fade out so fast. 🤷‍♀️)  I named him Oscar, in honor of the number one grouch.

Update #2) There is a new condominium in the neighborhood!  Move in ready!  And hopefully reserved solely for some tiny-little precious wrens.  I will keep you updated on the feathery real estate market.  💕

But...can you believe this was a project Matt conceived for the kids?!!  I had absolutely no part.  And each kid got to express her and his own personal creativity.  I can't wait to hear what the birds have to say!

I hope you had a good weekend, my friends.

Do not go gentle into that good night!  Keep fighting the good fight.  Want any more quotes or cliches?  😁  I'm done. 🎭  Goodnight!