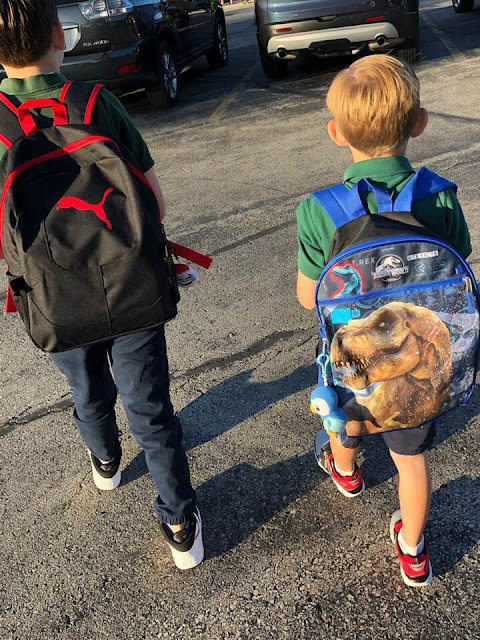 I'm afraid I am going to end up hating Mrs. Alexander.  It’s a terrible thing, but I think it is an inevitable thing.  I mean...just imagine facing, every day, the woman who stole from you the love of your life.  What do YOU feel, my friend?  Hate.  Am I right?

It is sooooo unfortunate, because, as Evan says...Mrs. Alexander IS pretty.  I like her hair, too.  And I agree she is a “good girl.”  But that dog puppet Toto she pulled out at storytime the first day.  He REALLY stole the show...

My baby literally cried the first night after school.  Like uncontrollable sobs.  He was so sad, so sad, because NEXT YEAR when he goes to first grade, he won't get to see Toto anymore.  (Great!  He got my deep, thoughtful, emotional heart.  Son, you have lots of happy days before that.  Don't think so much.)  Which left me thinking...Mrs. Alexander...well...Mrs. Alexander has become pretty important in my little guys eyes...her and her little dog, too.  And the inevitable truth remaining is that Mrs. Alexander has just unwittingly become my mortal enemy.  She is the "other woman" who will likely break this mama's-boy bond between me and my last little cling-on. 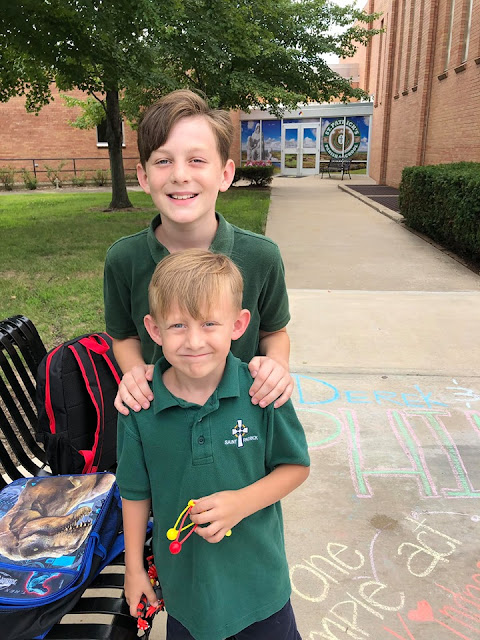 It has to happen.  I have known the day would arrive, and many times, I have desired it to hurry up and COME ON!  But the truth is, when this little fledgling flies, it is not going to be easy for me...no matter how many days I have prayed for it.  And there will likely be a little resentful grudge in my heart.

I was actually in shock at how well he went to school that first day.  I had mentally noted, just days before, that it was odd I wasn't feeling a bit sad about his upcoming big day.  Then, I realized I was too busy with the panicked images in my head of him sobbing and clinging to my leg, refusing to go.

He had trauma from a preschool experience at the same school.  That time when he went from Grandma's Babysitting Services to long, full days for his first time away from home.  And on the fourth day, when I was getting ready to head out the door, he had a complete meltdown.  He would NEVER go back to preschool.  He made that very clear.

So, I had no idea how he would really handle kindergarten, despite the fact that we'd had several positive conversations about it over the summer.  He did not argue. He even seemed excited about it, but let's face it.  He still spends EVERY night in my bedroom, because he would miss me too much upstairs in the room right above my head. 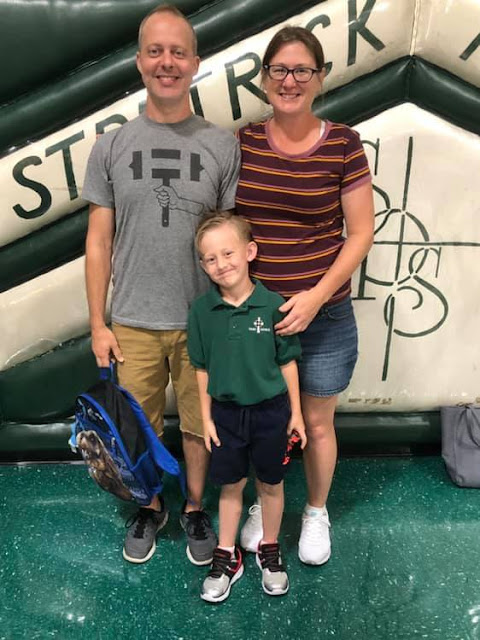 I really was relieved when he walked straight over to his kindergarten line and did not even look back at me as they headed to the classroom.  This was beyond my wildest imaginations of how this day would go.

But then...I noticed I was having a lot of trouble breathing in the extremely confined space of the empty gym.  And I was particularly antsy to get OUT THE DOOR.  And I couldn't find Matt, and that really didn't matter, because I HAD to get outside even if I couldn't get in the car.  And I saw a mama whose face looked exactly how I felt, and thank you, GOD we bonded and talked.  I was able to offer her some empathy and understanding, which helped me cope in my own time of need.  And I didn't even cry until Matt was driving off all excited that he had "socialized" (which is totally MY thing) at the donuts for parents downstairs, and I was proud of him, but I was just thinking, "Good God, Man, PLEASE just drive."  And then he asked me, "How are YOU doing?"  And I said, "NOT GOOD, so DON'T talk to me about it!"  And it was about that time I started to realize I was having a harder time with this whole Senior/Kindergartener thing than I realized. 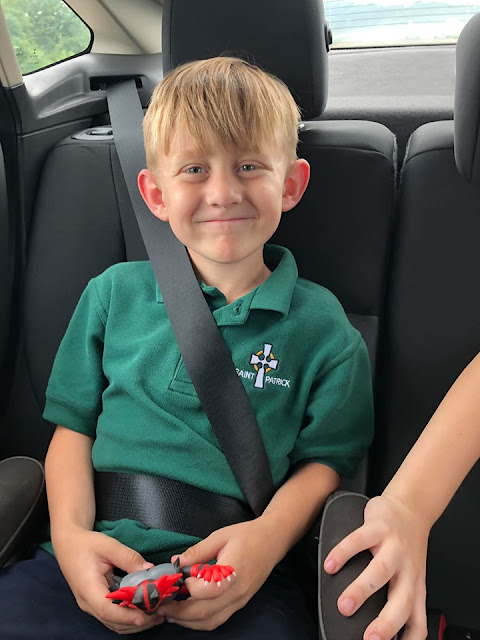 Of course, we all know I don't REALLY hate Mrs. Alexander.  My heartbreak shows itself in the strangest ways, sometimes.  Mrs. Alexander is quite lovely, in actuality, and we have a lot in common.  As a matter of fact, I genuinely like her, and I know we could be friends...

...but...humans will be humans.  Possessiveness and jealousy ARE a real thing.   And mama bears will be mama bears.

Alas, what's mine won't ALWAYS be mine, no matter how tightly I might cling...to THE VERY BITTER END.  And since I am aware of all the ins and outs of human emotions, I won't take it out on Mrs. Alexander when Evan's allegiance begins to turn from me, or when all his happy photos are now with her instead of me.  Because I am truly so grateful he has such an exceptional teacher, and I want the VERY best for my son.  And part of that is learning to spread his wings and fly this coop to dream a little dream of his own.

So, I WILL let go...if maybe very gradually and a little more than slightly begrudgingly.