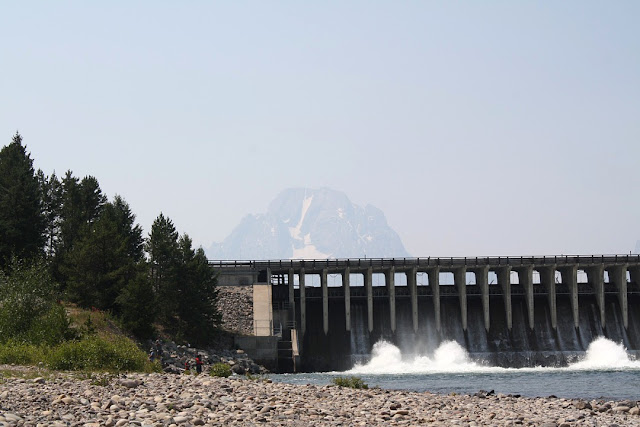 Well...our last day in Yellowstone wasn't really even in Yellowstone at all.  We decided to spend the day with minimal driving, since we would embark on another long drive the next day.  We also wanted to play it rather low key, since we had worn ourselves out with touristy things the day prior.  And I officially decided I could NOT leave the Yellowstone area without having at least attempted to put a line in a river somewhere.  So...we focused on a little area in the Grand Tetons, which was close, visited a lodge to buy some permits and a little fishing rod, and we headed to Jackson Lake Dam for a little outdoor fun and fishing. 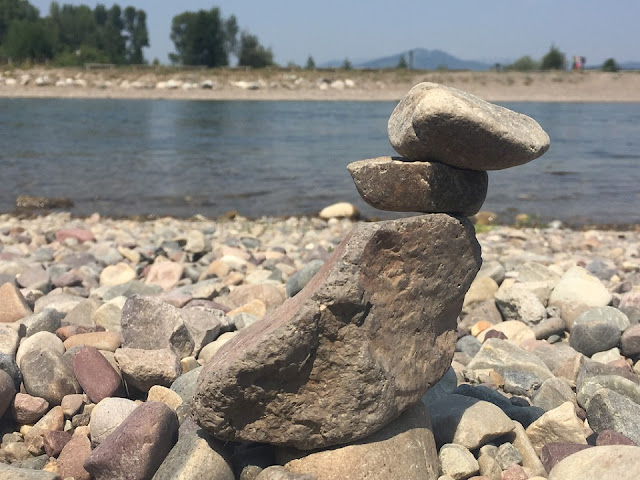 Since we only had one fishing pole, we had to take turns casting out and reeling in (and that's about ALL we did as far as "fishing" is concerned at Jackson Lake Dam...cause we caught all of about NOTHING!).

There was plenty to entertain us while we waited turns to not catch fish, though...  Besides playing in the rocks and gorgeous landscapes, we had some great little opportunities to witness nature at it's best.  And I found a really long piece of tangled scrap fishing line I thought might come in handy, so I shoved THAT in my pocket...because...me.  Whatcha gonna do?!  🤷‍♀️  #resourceful?? 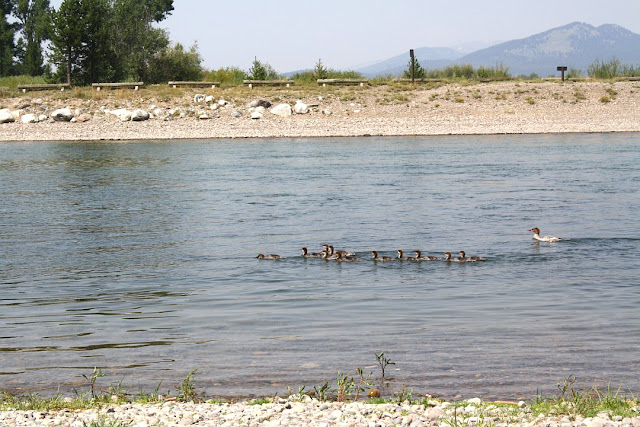 And I thought WE had a lot of kids to look after!  😱  Pretty sure I counted 12 little ducklings. That is one competent Mama!

Regardless of the fact that we got completely skunked fishing, I'm pretty sure the kids still had a good time.  AND...lucky for them, I like to talk to people; I do not know a stranger; and I am FIERCELY determined when I set my mind to something.  Because sometimes, I just "will NOT accept defeat" 🎶. 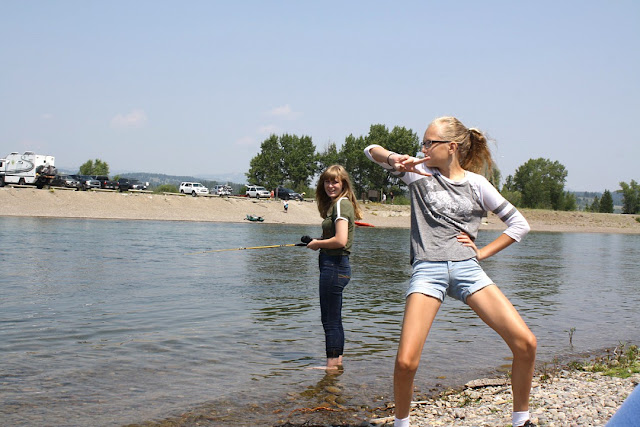 As it just so happens, I visited the lodge gas station that morning and took the time to talk with a really nice clerk.  Of course, I knew his whole life story within 10 minutes, because that is just who I am.  But I also took the time to get a little local perspective on things to do in the area.  He mentioned a road nearby that he and his girlfriend enjoy driving occasionally to look for wildlife, and he promised me there was plenty of access to the creek for fishing.  We left Jackson Hole rather late in the day, and we still had to pack up for our next big road trip in the morning...but I just didn't feel like I could say goodbye to the Yellowstone portion on the trip until we had at least given the local tip a quick go.  The day had been rather relaxing, and I didn't want to push things beyond the brink...but we opted to go for it. 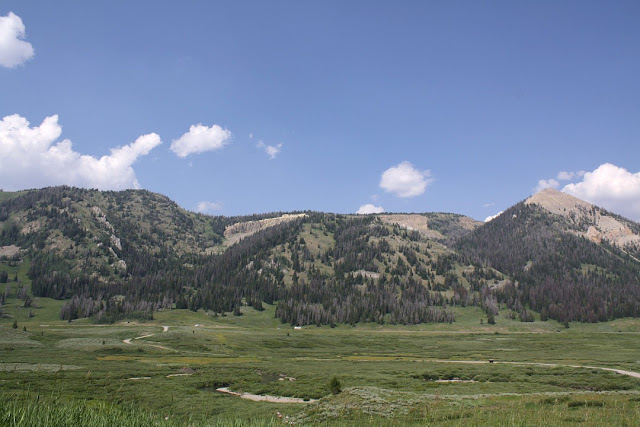 And...there were moments in which I began to question that decision.  The road, as it turned out, was a sketchy little one laner that twisted and turned along some pretty serious drop-off points.  Within the first quarter-mile, I spotted a creek...about a foot deep...but I knew there had to be better access.  So...I insisted we drive the FULL length of this crazy little road, and assured everyone it HAD to be safe, since it was locally recommended.  I mean...I knew this guy for like 10 whole minutes, so we were pretty much related by that point.  Of course, I could trust his advice.

I just smiled and feigned calm confidence throughout the drive, praying we would NOT meet another car going in the opposite direction (because not sure what they do up there in Wyoming, but the only reasonable option I could foresee is that one car would have to just reverse the whole thing to get out of that predicament).  Fortunately for my integrity as a parent, we did not 1) Wreck 2) Get Stuck 3) Die 4) Meet another car along that drive.  We did get to see some pretty views, and you'd better believe I was VERY vocal about ALL of the wonderful aspects of the drive.  😁 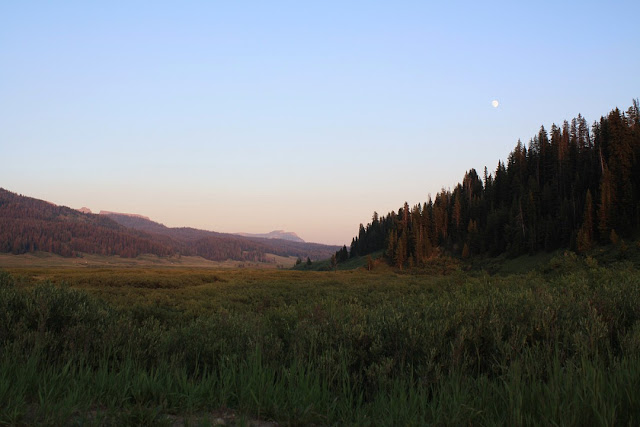 Unfortunately, I had NOT spotted one additional access to any form of water in which we might drop a line.  I did, however, use the drive time to untangle that line I found in Jackson Hole.  Perhaps based on someone's good advice??  I decided to wrap the line around my empty water bottle and attach a hook = we now had 2 fishing "rods"...Just in Case!

Did I mention I tend to be a pretty determined kind of lady?  Well, when we reached the end of that little lane, and ran back into the main road, I looked disappointment in the face and LAUGHED with disdain.  I looked straight ahead in my "not taking no for an answer" air and said, "Take me back to that little creek.  I, at least want to drop a line in." 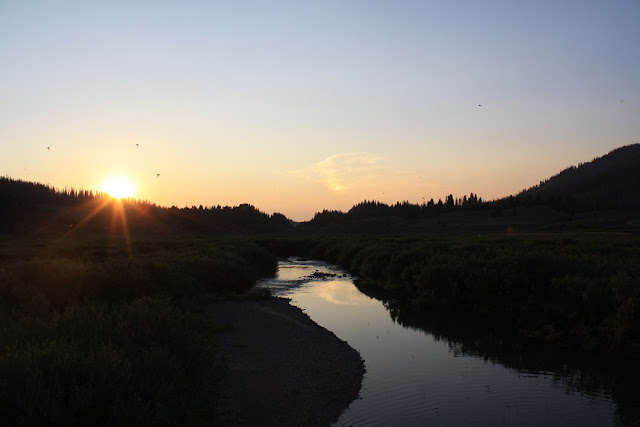 My good and faithful husband knew better than to question this one.  The rest of them laughed at me, as I got out of the car, alone, grabbed my pole and headed to that shallow little spot of water with ridiculously high hopes.

I was NOT alone for long.  As soon as I began talking about "bites," everyone was out of the car and begging for a try.  Fortunately, we had an extra fishing "rod" now (#resourceful), so we took turns putting in two lines.

And we did not leave until everyone had the chance to catch a Yellowstone Cutthroat Trout! 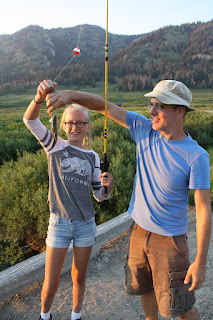 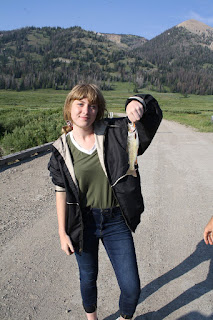 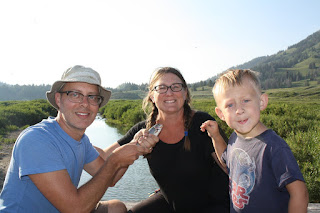 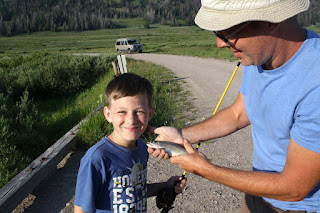 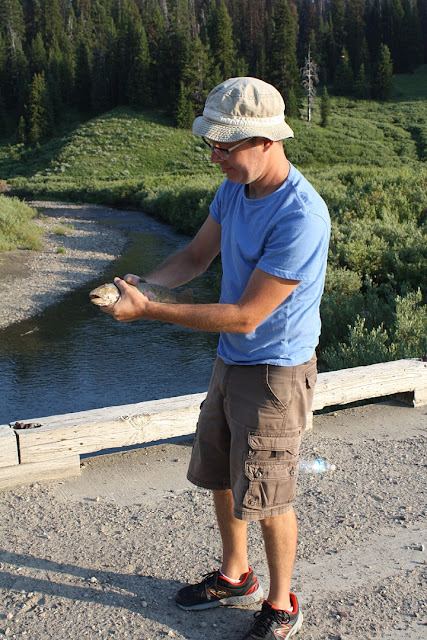 Matt's catch was quite impressive (just take one guess which "rod" he used?  YEP!  The water bottle fishing pole.  I coined that term. 😉), and his definitely could have been a keeper for a fish fry...but...sweet, little, tender, precious Evan.  So...ALL the fish were catch and release, and they returned happily to their shallow little creek for the next lucky "fool" who dares to take some crazy local advice.

We only ran into one other set of visitors to this lovely spot...a REALLY nice couple, who asked me to take their picture with the gorgeous landscape in the background.  You can believe, I took plenty...in exchange for our own precious family picture 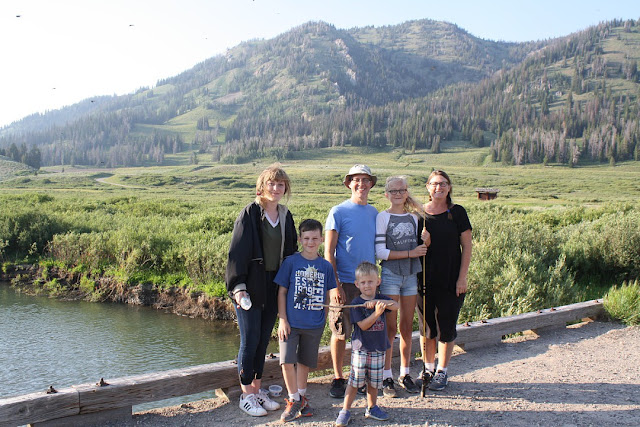 And that is how we closed out the Yellowstone portion of our trip.  Happy, content, and excited for the next phase of our adventure.