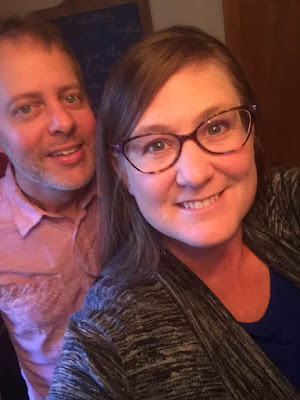 I have officially completed the first week of in-school work and internship.  So far, I'm still alive.  I did have a rough patch in the middle.  I had to deal with a few difficult groups (one in which I was being observed by my supervisor), and my ego quickly depleted.  I am so fragile, really.  And sometimes, my ability to cope runs thin.  The funny thing is, it was the garage door opener that finally made me break.

I am such a people pleaser, and in many cases, I am able to throw my heart into 1 Corinthians 4:13, but I AM a human, after all...quite an emotional being.  I survive the daily daggers and bullets with the use of very intentional coping skills, which I have developed over these forty years (most of them in the last 10).

When I arrived at home after such an emotionally charged day, I decided a walk would serve me best, and I NEEDED time with sweet Evan.  So, we headed out on our usual route, and by the end of it I was feeling much more at peace...until I realized I had lost the garage door opener.  Now, consider that Matt is a very laid back kind of guy.  However, when it comes to matters of the house and home, he can be quite particular.  I knew how he would respond, and THE LAST thing I would EVER want to do is to cause him stress.  I spent many harried moments retracing our steps, trying to find the needle in a 2 mile haystack.  By the end of it, I was ragged.  I stepped out of the "woods" and onto the main road, when who, but my knight, should appear.  I had been so desperate to have found that blasted remote BEFORE he got home.  I failed. 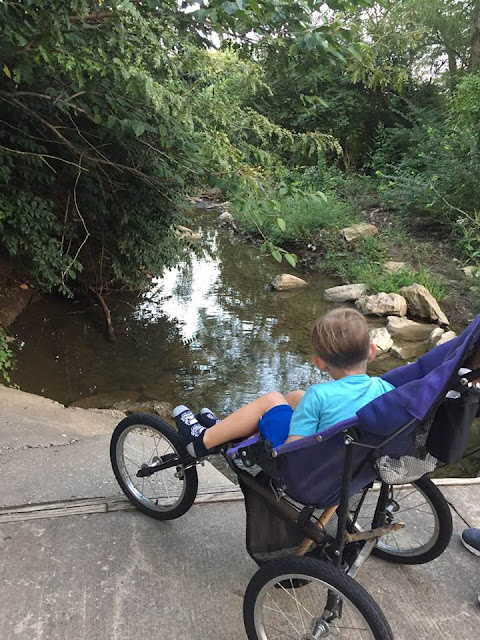 He didn't even see me, as he drove past.  I had to shout and was glad his window was open.  By the
time I got to him I was in tears, and what kind of husband could be angry with his wife so shattered, so defeated?  He simply offered to help.

Do you want to know where I finally found that (bad word) remote?!  Because, yes, we did finally find it...it had slipped into the far recesses of the stroller...an area I had neglected to search.  As I frantically searched the neighborhood, my garage door opener sat safely in my garage.  #mylife

To be fair, there were good moments in my work week, as well.  Waking up to a little happy trash talk from a friend, for example.  (I tell you truthfully, there is not much that brings me more joy than a little, healthy, friendly trash talk with the right kind of person.)  The funniest comment of the week...well, actually, the funniest comment of the week came from my own mouth, but, to your great misfortune, Matt has censored that one from publication 😁.  So, another funny comment from the week came from a student at one of my new schools.

The students were rather displeased with their seemingly forced attendance to what they apparently perceived as, yet another, boring lecture.  I quickly corrected their mistake with my naturally entertaining personality.  I wish I could say ALL the classes found me naturally entertaining, yet too frequently I find my talents rather underappreciated.  Not this class, however.  To them, I was a smashing success.  So much so, one student felt compelled to interrupt me with a slew of questions, the best one being, "How often has this been rehearsed?"  I assured him that, while I do often give this introductory presentation to other classes, I do not, in fact, practice it at home in front of the mirror.  😉

There is also the happy fact that I now have weekends pretty much off.  In the past, my Saturdays have been filled with catch up school work.  Now, there is more demand during the week, and much less on weekends.  It is freeing really.  It stinks a bit when Matt has to work, but regardless, I have not looked so forward to weekends for a long time. 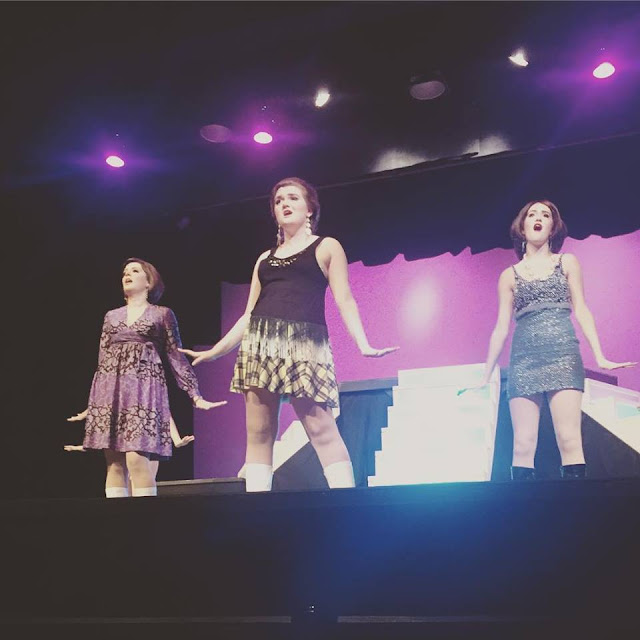 This weekend happened to be one of the happiest I've experienced in a great while.  I decided I had better get up and see my niece's play.  I have been notoriously neglectful in the past few years, considering the large burden's I've had on my plate.  However, Evan getting older has freed up so much demand.  While he is still rather clingy, it is with much less gusto, and I have manipulative tactics (like the promise of a Jurassic World Kinder Joy egg).  So, Matt and I were able to escape the house, leaving it all in the hands of my trustworthy teen, and we road-tripped with my family to St. Joseph, MO, where Kennedy performed in Shout! the musical.

Let me preface things by saying that Kennedy is my first niece.  She has faced a lot of challenges in her life.  She lost her mother two years ago, and that is one of the hardest...but it is one among many of the trials, tragedies and frustrations she has experienced in her 21 years.  She is a sophomore in college, and she is studying theater.

Kennedy and I spent a lot of time together in her first months.  She was my welcome excuse for 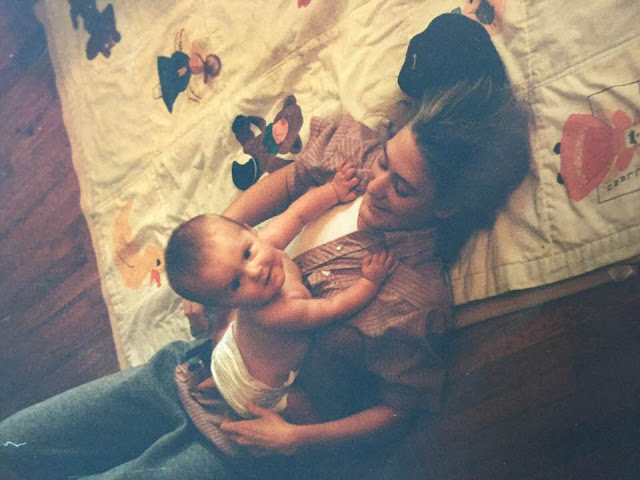 escaping the high school experience in which I neglected to thrive.  She was going to be born...soon.  Her parents had no idea what they were going to do with her.  They both worked, and so did all the grandparents.  I remember sitting with my pregnant sister, my mother, and Kaci in a circle table at Tippins debating the issue at hand.  I was so shocked when they accepted my resignation from high school to attend to the greater need.  By the grace of God I had plenty of credits to legally release me from my current obligations, and at the time, walking away from the valedictorian race did not phase me a bit.  I was tired...so, so tired...of always competing.

The freedom of spending my days with a relatively easy newborn, forcing myself to read Out of Africa, and using her crib attachable tape-player to go on walks with my own mixed tapes...it was Just Like Heaven.  Those were good days.  Well...comparative to the antecedent. 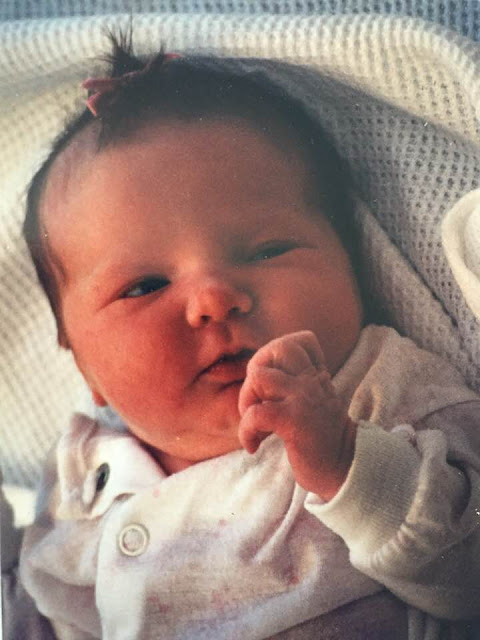 I do remember a bad day or two.  An eighteen-year-old is not the most experienced person on earth sometimes.  I was not familiar with what some would call "street smarts."  Logic.  Common sense.  I had never taken a baby to her first doctor's appointment.  I had no idea they gave said baby a shot that would make her cry.  However, the nurse was ever so kind as I cried along with my beloved, Kennedy, and I vowed to NEVER AGAIN take her to her doctor's appointment, because that is for the birds...or, in the least, for her parents or grandparents, who were, obviously, much more experienced than me.

Now, advance a few years, and my beloved Kennedy has rather taken to me and my youthful delights.  I am swinging her in a swing at the park, and we are joyfully singing Semi-Charmed Life by Third Eye Blind, and she proves to me that she knows EVERY SINGLE WORD.  No.  Literally.  The two-year old completed the most horrifying of sentences in that lyric, and she taught me, in that day, that I needed to be more careful with the things to which I exposed her precious little soul.

Advance a few MORE years, and you have a 21-year-old Kennedy on stage singing a song about a preacher's son doing some remarkable scandalous things, and I AM BLOWN AWAY.  She is talented.  She is gifted.  She is my precious, so precious, gift.  And my weekend was made.


Top it off with a bit of fun at our old stomping grounds, Stocksdale Park!!  And I think I can contentedly say to this week, in my Kaci's words, Kristen Out! 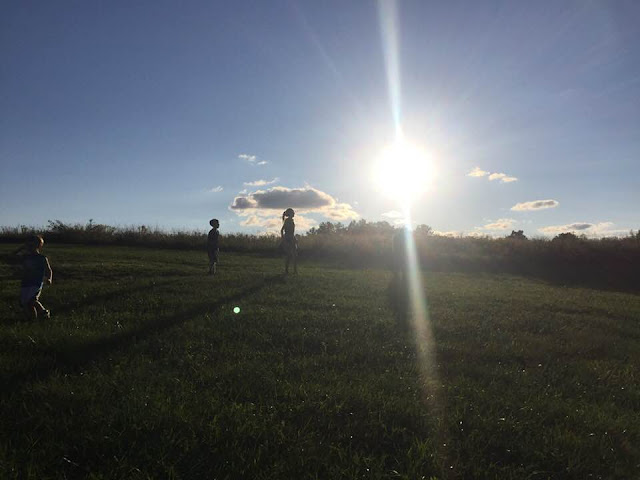