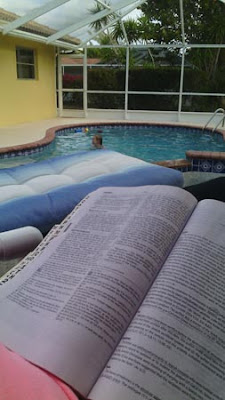 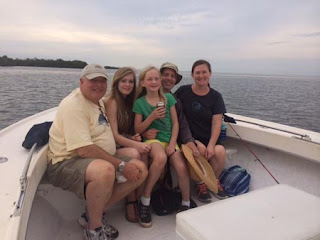 Very likely my favorite day of our Sanibel Vacation yet!


We started the morning slowly. It was warmer earlier.  The kids were in the pool by 9 am, and I was reading my Bible pool side. Oh, man, if every morning IN MY LIFE could be like this...

Lunched.  Packed and snacked up, ready to go by noon.  We met Captain Pete at his house, and we left by boat via his backyard!

Seriously?!! How did he GET this job?!! I asked if I could move in, but he didn't seem interested in a late 30's adopted daughter, her husband and 4 kids moving in. ;) Ah, well. 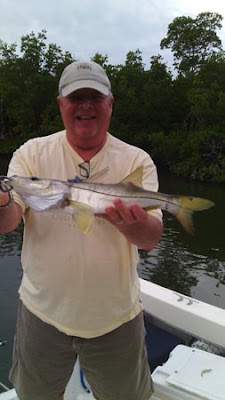 Within the first few minutes of our trip, we spotted a couple of dolphins.  The weather was nice and
overcast for most of the day, so the threat of sunburn was minimal.  We started out fishing for trout.  Perhaps it was the first stop where we also caught some snapper.  Pete knew just where to place us, and we made catches at every stop.  It’s hard to remember all that we caught and where. It was a very active trip! He baited us up with live shrimp (and some “white” bait…little fish), and kept very busy helping us remove our constant catches –selecting the ones that were acceptable and legal to keep. 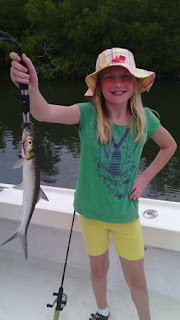 I think Matt caught the most fish.  The girls did really well, too…their lines were continually active.  I had trouble getting used to the positioning with the pole on the boat. I had to change rods and find my casting groove.  (Of course, I ended that “groove” by landing it in a tree minutes before we were done and cut short my fishing fun.)  And I also ended up pulling in the random, "lizard fish"…because that's the kind of thing I do...bizarre, weird and just plain odd. It was reminiscent of our long-nose gar extravaganza. Sure makes for a fun story, though. 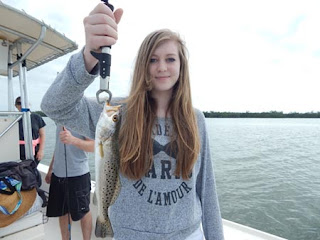 Matt pulled in a catfish.  Pete wouldn’t even bring it in the boat, because apparently, the barbs have a painful sting.


Mike pulled in a snook…a rare fish that people “spend a lifetime trying to catch” according to Pete.  His was small, but still a rarity.  Pete says the fish were almost pushed to extinction during a “cold snap” in Florida. 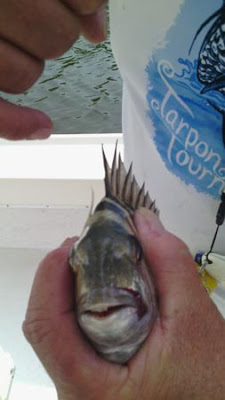 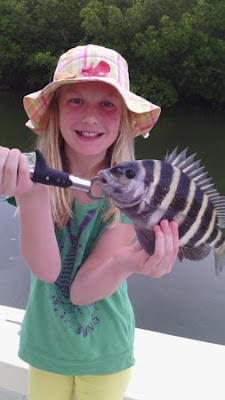 The girls had fun with ladyfish…a feisty catch.  The first one took Eden all around the boat trying to bring it in.

Our final and most prevalent catch, however, was the sheephead – a beautiful salt-water fish…until you get to its odd, human-like mouth.  Seriously.  It’s teeth are eerily similar to human teeth.  The large majority of our keepers were these sheephead. 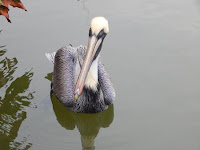 Pete cleaned the fish for us.  He is definitely experienced in catching AND cleaning.  We watched him work and “not feed” the pelican who was obviously accustomed to his “non-feedings.”  I’m pretty sure this bird was his pet. 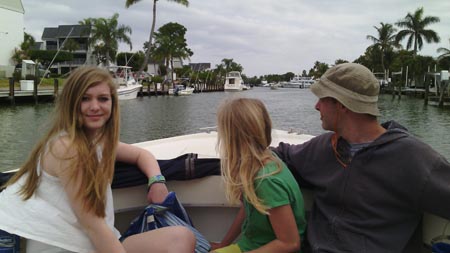 I was wiped out by the time we were done, and I was GLAD TO SEE MY BOYS.  I was also glad to hear they had been good for Grandma Debbie.  Not one tear from Evan…that is divine intervention!