Multitasking and the Homeschool Mom

Multitasking and the Homeschool Mom 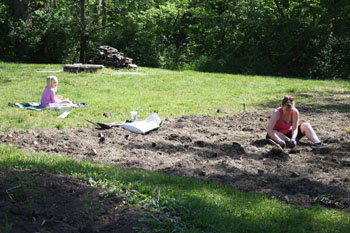 I've read that multitasking is actually counterproductive - that by multitasking, and continually redirecting our brains, we are actually wasting valuable time.
Apparently, we are more efficient if we eliminate the time it takes to switch back and forth between tasks. I'm sure the data included mistakes, which are most likely more common when we are trying to do more than what our brains can handle at once.


I would argue to tell that to the homeschool mom who is preparing dinner (which has to be completed and consumed in time for 5:00 lessons), staring at her two-year-old son (who is telling her he just "soiled" his underwear) AND trying to silence her daughter who is FRANTICALLY begging for help with her schoolwork.


Multitasking is my life!


We multitask homeschool and sub-urban farming!


Sure, I would love to put everything down and go at it all one at a time. Well...actually, I probably wouldn't like that at all. I tend to get bored with the mundane. I thrive on activity.

But, honestly...this homeschooling thing IS a little much. There are days (a lot more frequent than I would like to admit, of late) that I can't decide whether to pull out my hair, scream at the kids, or curl up on my bed and cry. Sometimes I fail...others, I pray and God sends me an out (usually in the form of Matt waking up to save the day...odd schedules may stink in some ways, but having him occasionally here during the day is a saving grace!).

I know, though, that this hectic time will pass, so I simply try to cling to the fleeting moments of peace and order. I will pray my way through this God-given assignment of mothering, which requires impossible multitasking and brings with it so much frustration.

I will keep my focus on the investment that I am making in my children. I know that it is one which holds more worth than all this earth could possess, and to me, the eternal IS priceless (and well worth the current sacrifice!).

I will continue to find ways to stay sane, seeking solace in knitting and writing and web designing and photographing, where I will also multitask.

But...I will remember this: I am a mother first. In that arena, I will not compromise. Nothing will come in the way of that, no project, no passion, no idea.