The Joke is On Me

The Joke Is On Me 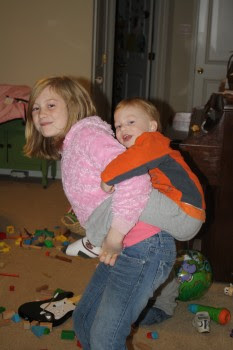 These are the kind of moments that make it all worthwhile:

Xander was having a rough morning. She didn't understand her math, and I couldn't help her. I asked her to sit and think until I could get to her. Since I had my hands in bread dough, she knew it would be awhile.

She grew anxious. On the one hand, she HATES waiting. She likes to get things done, and she lacks patience.

On the other hand, she assumed she would get it all wrong if she started the page, and she REALLY hates having to redo her work.

We had a near crisis at one point, when she thought she had indeed completed half the page in error. At that point I was able to spare the time to help her. She hadn't been wrong, after all. I calmed her down and set her going again with confidence.

She eased into a comical sarcasm and continued on with her homeschool work.

I told her it was time for spelling. "Oh great!" she blurted, along with a tongue-in-cheek list of negative scenarios. Granted, it was a tough list: holiday words.

I was caught between horror and humor as she began half-consciously spelling her words aloud as she wrote. She was very careful and concentrated, but she was spelling them ALL incorrectly: "Indupenence Day", "Memorile Day", etc.

I couldn't help but giggle at the irony and the thought of the impending breakdown that would occur when she found she'd missed every word. She giggled in response to mine. She was oblivious to my thoughts.

As she brought her paper to me for review, she smiled. I laughed. "I sure hope you weren't writing the letters you were saying. You put a lot of 'a's where e's should be."

She surprised me with a smile. I glanced at her paper. She had written ALL the words neatly, and they were mostly correct (8 out of 10).